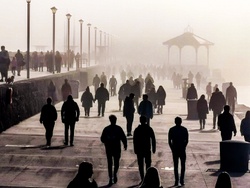 Everyone Has a Story

I’m one of those people who knows everybody.  Of course, I don’t know everybody, but I always say, if I don’t know The Man, I know the man who knows The Man.  Whenever I go to an airport, I’m always surprised that I don’t know anyone in the place.  The thing I always think about is all of these people have their own story.

The other day, Jenny and I were getting lunch at a local burger place and these two guys walked in.  One of them looked like a real cowboy.  Wrangler jeans, boots, tight denim shirt, cowboy hat, mustache, etc.  When he came up to the Coke machine, I asked him, “are you a real cowboy?”  He replied yes, he was.  I asked him what he did, and he said he was a bull rider.  It turns out he is a professional bull rider and there are two professional bull riding leagues.  I didn’t get to talk to him very long, but he told me he had been riding bulls since he was a little kid.  I had never spoken to a professional bull rider.  I guess there’s a first for everything.

After I crashed and broke my leg, I was wheeled into the pre-op room prior to my surgery.  This doctor walked up and said he would be doing my surgery.  He looked like he was about 12 years old.  I asked him if he had ever done this before.  He replied, he had.  I said, I usually get referrals from all of my clients and get the best doctor, blah, blah, blah.  He said, well you can go get someone else if you want.  I again asked for reassurance that he had indeed done this type of surgery and again he said yes.

After my surgery, he would come into the hospital and check on me.  On the Saturday after my wreck, he comes into the hospital room wearing his white coat, a tie and nice slacks.  I told him he didn’t have to get all dressed up to come see me.  He said he had clinic that day and had not gotten dressed up on a Saturday morning just to come see me.  That was a relief!  To make a long story short, he and I became friends.  Then I was able to learn some of his story.

When he was a teenager, he was a short track speed skater.  He trained at the Olympic Training Center in Lake Placid, NY and at one point was the 13th ranked speed skater in the country.  He had also gone to the University of Pennsylvania at the same time the former president’s son attended.  After graduating from Penn, he sold copiers for a while then went back to junior college to take prerequisite classes so he could apply to medical school at the age of 27.  He then did medical school, orthopedic surgery residency, a hand fellowship and somehow ended up in New Mexico.  The only reason I met him was he was on call the day after my wreck.  Another guy, another story.

One of my clients was getting engaged and I got invited to the engagement party.  When I was there, I was introduced to this guy and my client says, you guys should talk because Ben likes to ride bikes.  Ben is from LA, Lower Alabama.  He does like to ride bikes.  I was a sophomore in college when he was born.  He’s a computer engineer and he loves to hunt and go camping.  I do not.  His wife is from Minnesota, and they have two little girls.  One of his favorite jokes is, do you know the definition of an extroverted engineer?  He looks at your shoes when he’s talking to you instead of his own.

I read lots and lots of articles and books on financial planning.  They say things like, if you’re 35, this is how much you should have saved for retirement.  Or, the best investments to make now.  Or, you should pay off your credit cards before you buy a house.  Or, a 529 is the best way to save for your child’s education.

The point of this is, how do you know?  Everybody has their own story.  The bull rider might be single, get paid for winning rodeos and must pay all his own expenses.  Or he might be married to a doctor and rides bulls just for the hell of it and is living off the proceeds from his family’s ranch.  How would I know unless I sat down with him and asked him questions and learned his story?

Some doctors are terrible with money and buy super expensive cars.  Some of them hate debt, save money like crazy and like to ride bikes.  Some computer engineers think they’re geniuses and can do everything by themselves.  Some of them like to go hunting and want to pay someone to help them plan for their future and build retirement portfolios so they have the time to do the things they love.

Even though there are some general rules that apply to most situations like, pay yourself first, diversify, buy some insurance etc., everybody is different and has their own story.  Your financial plan should match you.  You have your own story.  Your own hopes and dreams.  You might be more aggressive than the average 55-year-old engineer.  Maybe you have two grown kids and two younger kids from your second marriage.  Maybe you are super smart but would rather spend your time playing tennis than looking at the computer and trying to decide whether you should invest in the Roth 401(k) or go the traditional route.  Whatever it is, you should be you!  If you want any help with this stuff, I know a guy.  You can reach me HERE!  As always, thanks for reading.  KB